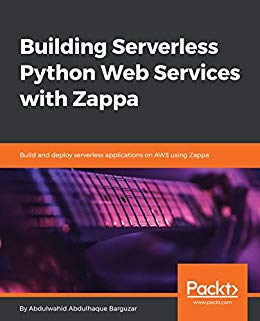 Master serverless architectures in Python and their implementation, with Zappa on three different frameworks.

Key Features
Scalable serverless Python web services using Django, Flask, and Pyramid.
Learn Asynchronous task execution on AWS Lambda and scheduling using Zappa.
Implementing Zappa in a Docker container.
Book Description
Serverless applications are becoming very popular these days, not just because they save developers the trouble of managing the servers, but also because they provide several other benefits such as cutting heavy costs and improving the overall performance of the application.

This book will help you build serverless applications in a quick and efficient way. We begin with an introduction to AWS and the API gateway, the environment for serverless development, and Zappa. We then look at building, testing, and deploying apps in AWS with three different frameworks-Flask, Django, and Pyramid. Setting up a custom domain along with SSL certificates and configuring them with Zappa is also covered. A few advanced Zappa settings are also covered along with securing Zappa with AWS VPC.

By the end of the book you will have mastered using three frameworks to build robust and cost-efficient serverless apps in Python.

What you will learn
Build, test, and deploy a simple web service using AWS CLI
Integrate Flask-based Python applications, via AWS CLI configuration
Design Rest APIs integrated with Zappa for Flask and Django
Create a project in the Pyramid framework and configure it with Zappa
Generate SSL Certificates using Amazon Certificate Manager
Configure custom domains with AWS Route 53
Create a Docker container similar to AWS Lambda
Who this book is for
Python Developers who are interested in learning how to develop fast and highly scalable serverless applications in Python, will find this book useful