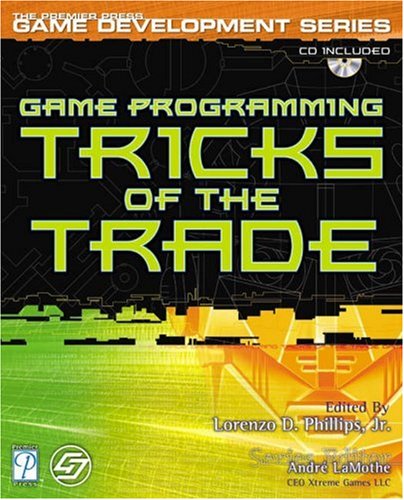 "Game Programming Tricks of the Trade" is a compilation of techniques from today's leading game programmers. Beginners will get started with invaluable tips, while intermediate game programmers can use these tricks to take their skills to the next level. There are even articles for advanced programmers who are looking for new and amazing effects to incorporate in their games. This book covers many exciting topics including Artificial Intelligence and multiplayer game programming. Plus, the tricks taught are a combination of OpenGL and DirectX to provide something for everyone!

This book was pretty good. Basically I'd like to echo the other favorable reveiws for this title. A lot of good info for those learning game development.

Also, something another reviewer commented on. Another reviewer stated that 99% of games for the PC do not use OpenGL on the PC. This could not be more wrong. Just about every game released for the PC gives you an option to view the game using Direct3D or OpenGL. Every major, and most minor, games programmed out there are programmed in both OpenGL and Direct3D. So anything learned about OpenGL is definately relevant.

I give it 3 stars because I am just an amateur beginner and any book with information like this book really appeals.
On the other hand, I would like to congratulate those for exposing the negative aspects of the book. I hope the publishers take heed to whats been said and raise the standards higher for subsequent books. However, that does not mean that the price should be raised significantly. I certainly don't think this book is worth 69 bucks after all thats been said(maybe only half the price). I do not care if I am just an amateur, I would prefer value for money.

I have this book and I've found it a useful addition to my game dev shelf. However, I couldn't help noticing the problems some of the other reviewers had with the book. Now, I'm sure these other reviewers are of a high level intelligence, so I'm giving them the benefit of the doubt and assuming they simply arrived at some misunderstandings due to a hasty evaluation of the book. For example, one reviewer expressed great distress at the inclusion of the "Introduction to dev studio" and "C++ primer" chapters. Actually, these sections of the book are not part of the main content; rather, they are included as appendices. As mentioned earlier, I'm sure the reviewer was in this case making a simple mistake, as he seems to be extremely knowledgeable about the game development process and the industry at large. He makes various complaints about unnecessary portions of the book (i.e. ASCII table) being included to bloat up the page count. Since I am sure this reviewer is of a high level of intelligence, I'm going to accredit this claim to a brief lapse in cognitive function, possibly one due to epileptic seizure. Similar complaints are made in regard to the inclusion of entire-page chapter headers, and the like. These, also, are probably related to epileptic seizures on the part of the reviewer, since I am sure he is of a high level of intelligence. While some of the complaints made by the reviewer on the uselessness of certain chapters are, in some remote way, slightly valid, his negative perception of the book as a whole is, in my ever humble opinion, hugely flawed.

I agree and disagree

While the book may not be all that useful to an experienced programmer, one must keep in mind that there are more hobbyist programmers than seasoned veterans. And while these tricks may not be anything new to seasoned game developers, it is important to also note that there are more beginner programmers than experienced ones and let's be honest, experienced programmers are not taking the time to write much material (if any at all) that is useful to a beginner. Finally, I found the comment interesting regarding the good reviews being written by people with a vested interest. While this could be true, the same could be stated that the bad reviews are written by people with vested interest in a competing book. Hhhmmmm...

Anyway, I think the statement is true that the book is aimed at the hobbyist/beginner as most books are anyway. Even though some of the material can be found on the Net, I think it is great that the authors of that free material are now receiving some compensation!!! And at least the authors were honest and tell us it is available in older form for free.

I like the book and have ran it passed 11 of my friends/co-workers and we all agree that it is a book full of the right amount of detail to get anyone going.

I must admit that I thought the text-based chapter was outdated myself, but then it was brought to my attention that it was a good idea because not all hobbyist and would-be game programmers can grasp the concepts of graphics (i.e. DX 3D). We have to keep in mind that there are would-be game developers in junior high or even younger. This book made sure that no matter your skill level that you can write a fully functional game and there are numerous locations online where text-based games are still played.

Basically, I would recommend this book to any aspiring game developer as it is filled with a nice variety of techniques that can be used in conjunction with other book on specific topics.

But I must say that I will be glad when there is a book that deals directly with advanced topics from start to finish :)

Comments
No comments for "Game Programming Tricks of the Trade (The Premier Press Game Development Series)".
Add Your Comments
Please Login to comment