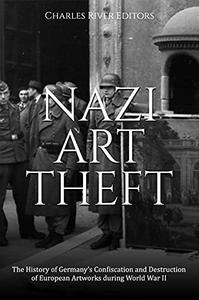 *Includes a bibliography for further reading
*Includes a table of contents
Looting and the acquisition of plunder have long been crucial features of war. Removing an enemy's portable wealth is a way of ensuring they lack the resources to create a new army while making it possible for members of the victorious army to be suitably rewarded. In the past, that plunder tended to be in the form of coinage, precious stones, gold, and silver. The removal of artwork for its own sake (rather than for the intrinsic value of the materials from which they were made) was relatively rare.
This began to change in the early 19th century when Napoleon began acquiring artwork from conquered territories. Following the French Revolution, the practice of displaying artwork in public became a notable feature, and large museums, such as the Louvre in Paris, put vast numbers of paintings and sculptures on display in an effort to educate and enlighten the general public. Even after Napoleon established himself as the virtual dictator of France, he retained the revolutionary notion of the public display of art, and when French armies began campaigns of conquest that saw them take control of many European countries, Napoleon ordered his forces to seize notable artworks for display in France.
Wars would continue to rage well after Napoleon was deposed, but World War II would dwarf everything that came before it. The Nazi regime that came to power in Germany under the leadership of Adolf Hitler in 1933 made it clear from the beginning that they intended to refight World War I, and this time they fully intended to win. At a time when most other countries were focused on the maintenance of peace and the reduction of armed forces, Germany underwent a period of rearmament that saw its military, theWehrmacht, become the most modern and powerful fighting force in the world.
In the long history of Europe, no country established such complete domination of the continent as the Nazis had by the summer of 1941. Before the war, Germany used the threat of the army rather than direct conflict to achieve territorial gains in Austria and Czechoslovakia. In September 1939, Germany invaded Poland, triggering the war, and by June 1940, German forces had occupied Poland, Norway, Denmark, Belgium, Luxembourg, Holland, and large parts of France. By the spring of 1941, Greece, Serbia, and Yugoslavia were also occupied by Nazi forces. Italy, Hungary, Romania, Spain, Bulgaria, Slovakia, Finland, and Croatia were all either in alliance with Germany or subject to German control. Furthermore, by the winter of 1941, German forces were close to Leningrad and Moscow.
With that, Germany directly controlled virtually all of Europe, from Norway in the north to Greece in the south, from the Atlantic coast of France in the west to the outskirts of Moscow in the east. Even Napoleon's campaigns had not conquered such vast tracts of territory so quickly or completely, and only Britain and Russia stood against Germany. Britain was in no position to mount an invasion of the continent, and most people assumed the defeat of Russia was simply a matter of time as Nazi forces rolled ever further east.
At the end of 1941, it seemed to many people, especially in Germany, that the war was virtually over, and some began to consider what a post-war Europe would look like after a Nazi victory. A few thought about culture and how the new Berlin Hitler was planning should also become a new world center for art, and with nothing to stop them, the Nazis became the most rapacious looters of art the world had ever seen, to the extent that it has been estimated that the Nazis may have acquired up to 20% of all art in Western Europe. Some works were returned after the war, many disappeared, and still others have become the subject of intense speculation.
Visit My Profile News Here : https://www.ebookee.com/user/book24h

Comments
No comments for "Nazi Art Theft The History of Germany's Confiscation and Destruction of European Artworks during World War II".
Add Your Comments
Please Login to comment