Paris and the Right in the Twentieth Century 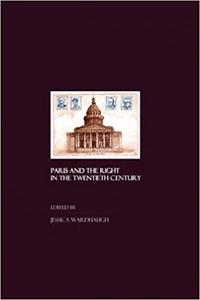 Jessica Wardhaugh, "Paris and the Right in the Twentieth Century"
English | ISBN: 1847180949 | 2007 | 260 pages | PDF | 4 MB
'It really is an outstanding and innovative collection of essays, which breaks new conceptual ground in exploring the politics and culture of the Right in the French capital from the nineteenth century to the present day. This is a fascinating subject, which does much to bring a much-needed understanding of how the Right has been a durable and successful presence in the life of the capital of France from the Dreyfus Affair to the election of Jacques Chirac as mayor. It is also a volume which brings together both French and British-based scholars of France, and is (for once) genuinely multi-disciplinary, including contributions by leading scholars of literature, history and politics. I have no doubt that the collection will have a considerable impact and should be read by all those who are interested in understanding the diverse textures and cultures of the Right in modern and contemporary France.' Martin Conway Baliol College, Oxford Certain images of Paris have become icons for the left, but the Paris of the right has received far less attention. This groundbreaking collection of essays examines the relationship between Paris and the right in the twentieth century, exploring how political leaders and parties have depicted and controlled the streets, people and history of Paris, and how the city has been both context and inspiration for journalists and novelists of the right. The first part focuses on the relationship between the right, the street and the people, and describes some of the most contentious political movements in recent French history, from the anti-parliamentary leagues of the Belle Époque to the contemporary Front National. The second part examines the importance of Paris for de Gaulle and his successors in their exercise of authority and control, whether in the media, the streets, or municipal politics. Lastly, the book explores the Paris imagined and experienced by right-wing novelists from Charles Maurras to the post-war Hussards , mapping out an intellectual topography and emphasising the tensions between a real and imaginary city. A Franco-British collaboration spanning history, literary studies and political science, this volume offers an original contribution to the political geography, culture and symbolism of the French capital.

Search More...
Paris and the Right in the Twentieth Century

Comments
No comments for "Paris and the Right in the Twentieth Century".
Add Your Comments
Please Login to comment