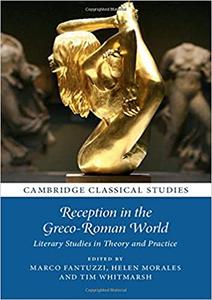 Marco Fantuzzi, "Reception in the Greco-Roman World: Literary Studies in Theory and Practice "
English | ISBN: 1316518582 | 2021 | 478 pages | PDF | 2 MB
The embrace of reception theory has been one of the hallmarks of classical studies over the last 30 years. This volume builds on the critical insights thereby gained to consider reception within Greek antiquity itself. Reception, like 'intertextuality', places the emphasis on the creative agency of the later 'receiver' rather than the unilateral influence of the 'transmitter'. It additionally shines the spotlight on transitions into new cultural contexts, on materiality, on intermediality and on the body. Essays range chronologically from the archaic to the Byzantine periods and address literature (prose and verse; Greek, Roman and Greco-Jewish), philosophy, papyri, inscriptions and dance. Whereas the conventional image of ancient Greek classicism is one of quiet reverence, this book, by contrast, demonstrates how rumbustious, heterogeneous and combative it could be.

Search More...
Reception in the Greco-Roman World Literary Studies in Theory and Practice

Comments
No comments for "Reception in the Greco-Roman World Literary Studies in Theory and Practice".
Add Your Comments
Please Login to comment