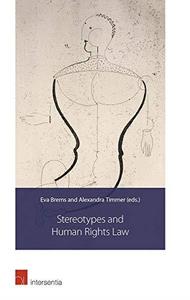 Stereotypes and Human Rights Law By Eva Brems; Alexandra Timmer (eds.)
2016 | 206 Pages | ISBN: 1780683685 | PDF | 5 MB
Stereotypes are beliefs about groups of people. Some examples, taken from human rights case law, are the notions that 'Roma are thieves', 'women are responsible for childcare', and 'people with a mental disability are incapable of forming political opinions.' Increasingly, human rights monitoring bodies-including the European and inter-American human rights courts, the Committee on the Elimination of Discrimination against Women, and the Committee on the Elimination of Racial Discrimination-have voiced their concerns about stereotyping and warned States not to enforce harmful stereotypes. Human rights bodies thus appear to be starting to realize what social psychologists discovered a long time ago: that stereotypes underlie inequality and discrimination. Despite their relevance and their legal momentum, however, stereotypes have so far received little attention from human rights law scholars. This volume is the first one to broadly analyze stereotypes as a human rights issue. The scope of the book includes different stereotyping grounds, such as race, gender, and disability. Moreover, this book examines stereotyping approaches across a broad range of supranational human rights monitoring bodies, including the United Nations human rights treaty system, as well as the regional systems that are most developed when it comes to addressing stereotypes: the Council of Europe and the inter-American system.

Comments
No comments for "Stereotypes and Human Rights Law".
Add Your Comments
Please Login to comment