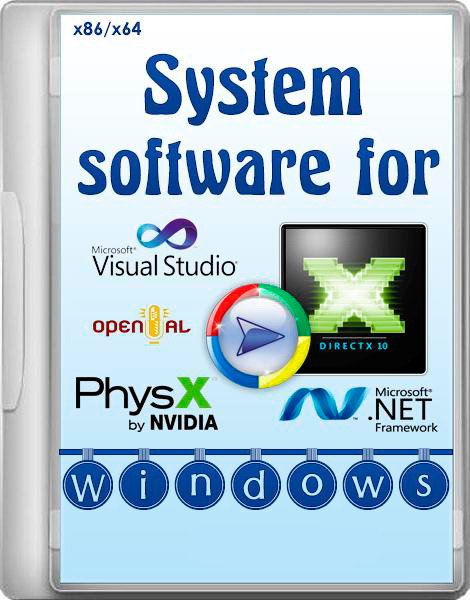 Often if you can not start the game or program due to a lack of a system component? For you created a small utility to automate the main components of the installation process, without which it is difficult to imagine a PC. By default, selected components that are required for installation. The installer will offer only the components to be installed are compatible with the operating system in which it is running. Bit operating system is also determined automatically. The installer prompts you to restart the system itself, if it is necessary for the components.

DirectX. The executable library for the end user will update the current version of DirectX - the built-in Windows technology that allows you to run high-speed multimedia and games on the computer.
Microsoft Visual C ++. Redistributable Visual C ++ packages install the runtime components necessary to run C ++ applications that are developed using Visual Studio C ++.
.NET Framework. The .NET Framework distribution package installs the .NET Framework runtime and the associated files needed to run and develop applications targeted for the .NET Framework.
Windows Media Video 9 VCM is a Video Compression Manager (VCM) based on Windows Media Video 9.
OpenAL is a previously freely distributed cross-platform application programming interface (API) for working with audio data. A key feature is working with sound in 3D space and using EAX effects. Supported by Creative.
Rapture3D is a program for recreating the sense of presence, by replacing the usual Software-drivers with their improved version. With its help in games it is easy to determine, for example, where the enemy is in steps or where an explosion occurred, etc.
NVIDIA PhysX is a cross-platform physics engine for simulating a number of physical phenomena. PhysX can also perform calculations using a conventional processor.
NVIDIA PhysX Legacy must be installed for games released in late 2007 or earlier. If the game released during this period worked correctly with PhysX software version 9.12.0613, but does not work with later versions, you need to install PhysX Legacy.
RuntimePack Lite. The proposed set of files avoids the "Runtime Error", if not all, then most of these messages are suitable (recommended for installation) for operating systems from Windows XP to Windows 8 (x86 / x64).
RuntimePack Full includes RuntimePack Lite and Microsoft Visual C ++ 2005-2013 libraries.
Games for Windows LIVE is a free online gaming service for Windows, like Xbox Live, aimed at a network game. It allows PC users to connect to all devices that support Windows Live, including Windows Mobile and Zune. The user at registration receives a unique tag of the player Gamertag, which is compatible with Xbox Live, and gives the opportunity to play online, monitor the status of friends, receive and send messages, collect achievements. In addition, there is a cross-platform voice chat. In some games (for example, Shadowrun), players on the PC can play along with the players on the Xbox 360. It is necessary to run games with the support of Games for Windows LIVE.
Java Platform is a technology used to develop applications that make working on the Internet more fun and convenient. Java differs from the javascript programming language, which is a simple technology for creating web pages and is executed only in the browser.
Adobe Flash Player is a cross-platform module that is an indispensable tool for playing multimedia interactive Flash content (FLV files, SWF files) in various browsers and operating systems.
Adobe Shockwave Player is designed to enhance the capabilities of traditional web browsers in the field of information representation and user interaction. Main applications: 3D vector animation, interactive web applications, video playback, games. Applies as a plug-in to the browsers Internet Explorer, Google Chrome, Mozilla Firefox, Safari, Opera, Netscape, Netscape-compatible, etc.
Adobe AIR is a cross-platform runtime environment that allows developers to use HTML / CSS standards, Ajax, javascript, Adobe Flash Professional and Adobe Flex software, and ActionScript for deploying Web applications that are implemented as stand-alone client applications and are not subject to restrictions, Related to the use of the browser.
Microsoft Silverlight is a software platform that includes a module for the browser that allows you to run applications that contain animation, vector graphics and audio and video clips.
Microsoft XNA Framework Redistributable allows game developers to avoid many technical difficulties in writing code, and also provides a significant reduction in the cost of the final product. In addition, thanks to XNA programmers can create fundamentally new games with high-quality graphics. The XNA toolkit was originally designed to make it as easy as possible to develop games for the Xbox console and computers running Windows.
Microsoft XML is a set of services that allows applications written in JScript, VBScript and Microsoft development tools to build applications for Windows based on XML.
Windows Media Player Firefox Plugin is a plug-in for the Mozilla Firefox browser that allows you to integrate Windows Media Player into it. Mouth

Comments
No comments for "System software for Windows 3.0.9".
Add Your Comments
Please Login to comment