The Expendable: The true story of Patrol Wing 10, PT Squadron 3, and a Navy Corpsman who refused to surrender when the Philippine Islands fell to Japan 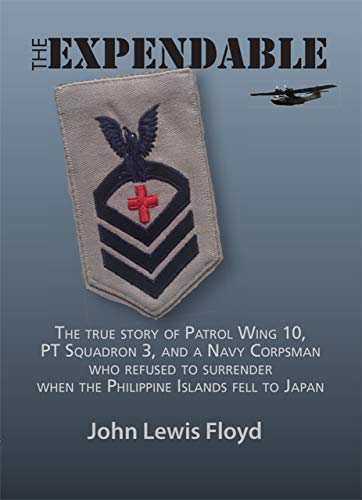 "A riveting page turner. As a retired Navy combat Hospital Corpsman I can appreciate this story from leaving the farm,to Great lakes to corpsman basic to combat. A fantastic story." - Don Colling - Amazon Reviewer

The Expendable is a captivating, true story from the opening months of WWII in the Pacific. As smoke billows skyward from Pearl Harbor, Japan throws its full military might against the outnumbered and under-equipped Filipino forces. Hart sends his U.S. Asiatic Fleet south, to the safety of Allied waters. When the remnants of PBY Patrol Wing 10 depart with the fleet, Charles Beckner, corpsman for Squadron 102, is left behind with no apparent avenue for escape. Under relentless pressure from General Homma's troops and air forces, the American-Filipino troops retreat to the tip of the Bataan Peninsula. Sick with malaria and dysentery and nearly out of food and ammunition, surrender is imminent for those who survive. Charles wrangles a transfer to Motor Torpedo Boat Squadron 3 as machine gunner and corpsman on PT-34. After two months of engaging enemy forces along the Bataan coast, Squadron 3 is tasked with a critical, covert mission that once more leaves Charles stranded, this time on the southern Philippine island of Cebu. As the Japanese noose tightens, Charles joins other sailors and soldiers preparing for guerrilla resistance from the interior mountains of Mindanao Island. His plans are interrupted by another assignment, one that will unexpectedly reunite him with crewmen of his old seaplane squadron. With advancing Japanese troops only minutes away, there is one possibility for escape. It is risky, and failure will be fatal.

"We are losing our World War II veterans by the thousands daily and along with them we all too often lose their stories. John Floyd has done an admirable job of preserving the stories of his father-in-law in a fast-paced and highly readable narrative; he knows his military history as well as his family’s." -Walter Borneman, Author of The Admirals and MacArthur At War.

Search More...
The Expendable: The true story of Patrol Wing 10, PT Squadron 3, and a Navy Corpsman who refused to surrender when the Philippine Islands fell to Japan

Download links for "The Expendable: The true story of Patrol Wing 10, PT Squadron 3, and a Navy Corpsman who refused to surrender when the Philippine Islands fell to Japan":

Comments
No comments for "The Expendable: The true story of Patrol Wing 10, PT Squadron 3, and a Navy Corpsman who refused to surrender when the Philippine Islands fell to Japan".
Add Your Comments
Please Login to comment