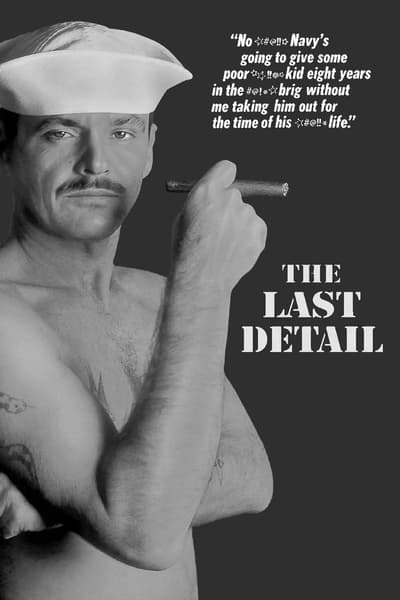 Two bawdy, tough looking navy lifers - "Bad-Ass" Buddusky, and "Mule" Mulhall - are commissioned to escort a young pilferer named Meadows to the brig in Portsmouth. Meadows is not much of a thief. Indeed, in his late teens, he is not much of a man at all. His great crime was to try to steal forty dollars from the admiral's wife's pet charity. For this, he's been sentenced to eight years behind bars. At first, Buddusky and Mulhall view the journey as a paid vacation, but their holiday spirits are quickly depressed by the prisoner, who looks prepared to break into tears at any moment. And he has the lowest self-image imaginable. Buddusky gets it into his head to give Meadows a good time and teach him a bit about getting on in the world. Lesson one: Don't take every card life deals you. Next, he teaches Meadows to drink, and, as a coup de grace, finds a nice young whore to instruct him in lovemaking. Mule, who worries aloud about his own position with military authority, seems pleased with Meadows's progress. However, when the trio reach Portsmouth, the game comes abruptly to an end as reality sets in.