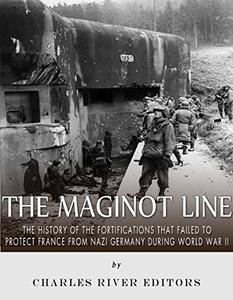 The Maginot Line: The History of the Fortifications that Failed to Protect France from Nazi Germany During World War II by Charles River Editors
English | June 17, 2015 | ISBN: 1514381656 | 75 pages | EPUB | 1.98 Mb
*Includes pictures *Explains the origins of the Maginot Line, its construction, and the World War II fighting around it *Includes online resources and a bibliography for further reading *Includes a table of contents "We could hardly dream of building a kind of Great Wall of France, which would in any case be far too costly. Instead we have foreseen powerful but flexible means of organizing defense, based on the dual principle of taking full advantage of the terrain and establishing a continuous line of fire everywhere." - Andre Maginot As the power of Nazi Germany grew alarmingly during the 1930s, the French sought means to defend their territory against the rising menace of the Thousand-Year Reich. As architects of the most punitive measures in the Treaty of Versailles following World War I, the French government made natural targets for Teutonic retribution, so the Maginot Line, a series of interconnected strongpoints and fortifications running along much of France's eastern border, helped allay French fears of invasion. The popular legend of the Maginot Line portrays the frontier defenses as a useless "white elephant" project that was prompted by a gross misapprehension of warfare's new realities in the mid-20th century and quickly overwhelmed by the forceful advance of the German blitzkrieg. English idiom today invokes this vision of the Maginot Line as a metaphor for any defensive measure strongly believed in but actually useless. Indeed, usages such as "Maginot Line mentality," describing an overly defensive, reactive mindset, perpetuate the legend. As a French author and military liaison with the British, Andre Maurois, wrote about his disillusionment with the defensive line he originally enthusiastically supported: "We know now that the Maginot line-complex was a dangerous disease of the mind; but I publish this as it was written in January, 1940." In reality, however, the actual Maginot Line proved considerably more functional than memory has served. The true flaw in French military strategy during the opening days of World War II lay not in reliance on the Maginot fortifications but in the army's neglect to exploit the military opportunities the Line created. In other words, the border defense performed as envisioned, but the other military arms supported it insufficiently to halt the Germans. The French Army squandered the opportunity not because the Maginot Line existed but because they failed to utilize their own defensive plan properly. Some French commentary contributed to the legend, but the bloviating of politicians altered nothing regarding the Maginot Line's actual purpose or history: "General Maurin, defended the status quo in these words: '[H]ow could one think that we are still thinking about an offensive when we have spent billions to establish a fortified barrier? Would we be mad enough to advance beyond this barrier to undertake some adventure?' [...] but the Maginot Line had never been conceived as a sort of Great Wall of China sealing France off from the outside world. Its purpose was to free manpower for offensive operations elsewhere." (Jackson, 2004, 27). In fact, a forgotten battle in the southeast of France, where four French divisions (later reduced to three by the redeployment of one northwards in a futile effort to stem the German tide) held off 32 Italian divisions thanks to the defensive power of the so-called "Little Maginot Line of the Alps," proved the soundness of both the concept and engineering. Though the Italians suffered from poor equipment and the meddling incompetence of Mussolini's personal "leadership," the fighting on the Alpine front brilliantly highlighted the Maginot Line's success as a "force multiplier." French soldiers held off brave but futile Italian attacks at odds of 8:1 or 10:1 in favor of the Italians for five days until an armistice with the Axis put an end to this undeniable display of the Maginot Line's effectiveness.

Search More...
The Maginot Line The History of the Fortifications that Failed to Protect France from Nazi Germany During World War II

Comments
No comments for "The Maginot Line The History of the Fortifications that Failed to Protect France from Nazi Germany During World War II".
Add Your Comments
Please Login to comment