The Temptations of Trade Britain, Spain, and the Struggle for Empire 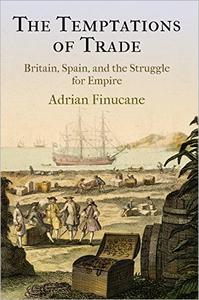 The Temptations of Trade: Britain, Spain, and the Struggle for Empire (The Early Modern Americas) by Adrian Finucane
English | April 22, 2016 | ISBN: 0812248120 | True EPUB | 224 pages | 7.2 MB
The British and the Spanish had long been in conflict, often clashing over politics, trade, and religion. But in the early decades of the eighteenth century, these empires signed an asiento agreement granting the British South Sea Company a monopoly on the slave trade in the Spanish Atlantic, opening up a world of uneasy collaboration. British agents of the Company moved to cities in the Caribbean and West Indies, where they braved the unforgiving tropical climate and hostile religious environment in order to trade slaves, manufactured goods, and contraband with Spanish colonists. In the process, British merchants developed relationships with the Spanish-both professional and, at times, personal.

The Temptations of Trade traces the development of these complicated relationships in the context of the centuries-long imperial rivalry between Spain and Britain. Many British Merchants, in developing personal ties to the Spanish, were able to collect potentially damaging information about Spanish imperial trade, military defenses, and internal conflict. British agents juggled personal friendships with national affiliation-and, at the same time, developed a network of illicit trade, contraband, and piracy extending beyond the legal reach of the British South Sea Company and often at the Company's direct expense.
Ultimately, the very smuggling through which these empires unwittingly supported each other led to the resumption of Anglo-Spanish conflict, as both empires cracked down on the actions of traders within the colonies. The Temptations of Trade reveals the difficulties of colonizing regions far from strict imperial control, where the actions of individuals could both connect empires and drive them to war.
More Ebooks ,Course Expensive Download Click Here --> https://dl4all.org || https://oneddl.org

Search More...
The Temptations of Trade Britain, Spain, and the Struggle for Empire

Comments
No comments for "The Temptations of Trade Britain, Spain, and the Struggle for Empire".
Add Your Comments
Please Login to comment