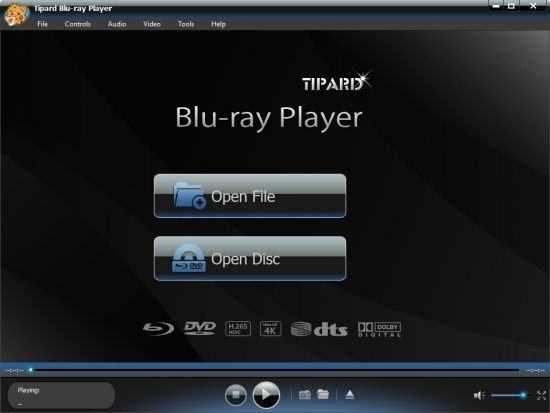 Play any Blu-ray disc without limitation
Tipard Blu-ray Player is specially designed to make Blu-ray discs playable on personal computers. With this Blu-ray Player, any Blu-ray disc, file even ISO image can be played on your computer without any limitation. Besides, it is very capable of playing 1080p HD videos and WebM HD videos with unmatchable quality and effects. If you want to watch a new-released foreign movie that doesn't show in the theaters of your country, you deserve this player software. You won't be troubled with this problem again if you get a Tipard Blu-ray Player. Just with this player software and a few Blu-ray discs can you enjoy the new-released movies and get the feeling of being in the theater.

Comprehensive media player
Actually, it can not only play Blu-ray discs, but it also supports Blu-ray files and ISO image files backup on your hard drive. Another factor that makes it more popular is that it allows you to play common video and audio files like MP3, TS, MTS, M2TS, MXF, TRP, TP, MP4, MXF, MTS, MKV, AVI, FLV, MPEG, etc. Almost all popular media files can be played by this player. It's rare and praiseworthy for a video player to have so much video playing functions yet zero loss of original quality. In another word, you can unload other players on your computer if you get Tipard Blu-ray Player.

Capable of playing 1080P HD videos
1080P HD refers to a very popular video format with super-high definition (1920*1080 pixel resolution), giving audience home theater visual enjoyment. However, most 1080P HD videos should be watched with special 1080P LCD TV, which is highly expensive. Tipard Blu-ray player software has solved this problem. All HD videos, including 1080P HD videos are supported by this advanced playing software. So you will get blazing visual enjoyment as long as you get this Blu-ray playing software.